Doha round out for the count 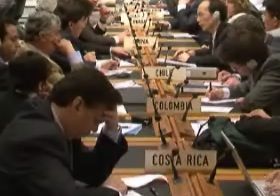 The Doha round of World Trade Organisation talks in Geneva collapsed on Tuesday, heralding a possible crossroads in the future of international trade, according to the New York Times.

Seven years of negotiation faltered as the established Western powers failed to find a middle ground with the developing economic juggernauts of India and China.

"There's no use beating around the bush; this meeting has collapsed," WTO head Pascal Lamy said. "Members have simply not been able to bridge their differences."

The break down of the talks signalled the developing powers' growing confidence, and the declining control of the US on the international stage.

The talks had been typified by a struggle against protectionism, and the US in particular had pushed for greater trade liberalisation. Measures to protect farmers in developing nations from expanding imports proved the breaking point, however, after the US, India and China could not reach a compromise.

The devil was in the details; the 'special safeguard mechanisms' which finally crumpled the talks were number 18 of 20 on Mr Lamy's list of Doha objectives. Brazilian foreign minister Celso Amorim said it was "unbelievable that we failed on one issue".

The safeguard mechanisms were temporary tariff barriers developing countries could erect to shield producers in the event of an import surge or a price drop. In the end it was the threshold for those tariffs the US, India and China could not agree on.

US representatives protested at what they called the developing powers' "blatant protectionism", an interesting accusation for a country whose agricultural subsidies hit US$23bn in 2005, according to the Washington Post.

Recent increases in the price of food and fuel contributed to the difficulties of striking a deal at the talks in Geneva. Higher prices have sparked protests in both developed and developing nations, making it harder for negotiators to reach a compromise on opening their markets up to greater competition, according to analysts.

The Doha round was originally envisaged as a vehicle for change for poorer, smaller nations who couldn't hold their own in bilateral trade negotiations. The consequences of the talk's failure will hurt these countries the greatest, according to EU trade commissioner Peter Mandelson.

"They will fall disproportionately on those who are most vulnerable in the global economy, those who needed the chances, the opportunities most from a successful trade round," he said.

According to Peter Power, a spokesman for the European Commission, the failure of the Doha round is a massive blow to confidence in international trading, something the industry can little afford in the current climate.

With developing powers like Brazil, India and China wielding more and more economic clout and depending less on Western concessions, and a rise in bilateral trade agreements, the future of the WTO as the global trade umpire is in doubt.

Many economists, however, say WTO agreements are still the best option for global trade. Whether the world's economic powers agree remains to be seen.