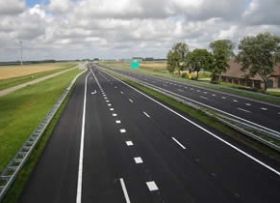 The Agriport development is located close to the A7 motorway

A proposed new glasshouse development in Wieringermeer, northern Holland, is a step closer to reality after the first two plots of land were sold to vegetable producers.

The two companies reportedly purchased a combined total of around 85ha, according to the Agrarisch Dagblad and plan to produce tomatoes and peppers on the sites, which are part of the Agriport A7 project.

A total of 525ha of land has been earmarked for phase two of the Agriport A7 project, in addition to 420ha already developed as part of phase one.

With final approval for the development expected to be granted in the autumn, construction work on the pepper farm is expected to start at the beginning of this month, according to site spokesman Jack Kranenberg.

"The intention is plant the peppers in the first quarter of next year so that the longer days of light and heat in the greenhouses can be exploited and then they can be harvested in the summer," explained Mr Kranenberg.

The pepper production will be managed by Sweetpoint Teelt, a joint venture between four growers with exclusive rights to grow the Ramiro varieties. Unlike ordinary peppers, Ramiro is said to be sweet and oblong, growing up to 20cm in length and available in red, green and yellow.

The second company to have purchased land as part of Agriport A7's second phase is Noordam-Barendse. Under the company name Tussenweg Red Harvest, brothers Leon and Jaap Noordam from De Lier and Wilfred Barendse from Tinte plan to build a greenhouse with an area of almost 16ha. Work on the tomato farm is set to get going in early 2009.