Port of Philadelphia in Lithuanian MOU 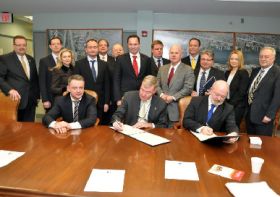 Lithuania's Port of Klaipeda and the Philadelphia Regional Port Authority (PRPA) have announced the signing an historic Memorandum of Understanding (MOU) that promises to open Philadelphia ports to the European and Asian shipping trade via the ice-free port of Klaipeda.

Lithuania’s transport and communications Minister Eligijus Masiulis led a delegation of the country's leaders to meet with Pennsylvania state and city officials, as well as Leo Holt, president of Holt Logistics Corp., and PRPA chairman Charles Kopp and executive director James McDermott. The delegation also included Lithuanian Ambassador to the US Zygimantas Pavilionis and Eugenijus Gentvilas, the director general of Klaipeda Seaport.

Together, they signed the MOU, which pledges increased support for expanded trade between Philadelphia and Klaipeda – a port city located on the eastern coast of the Baltic Sea.

"We live in an increasingly interconnected world, and this agreement significantly improves the Port of Philadelphia's ability to compete for the cargoes that mean jobs and opportunity for our region," said Holt. "The Port of Klaipeda is a gateway to greater shipping and trade opportunities throughout Western Europe and Asia, and we are honoured that they have selected Philadelphia for this purpose."

Holt said that Holt Logistics had already begun formulating plans to develop specific new commercial interchanges for cargo flow bound for the Baltic Sea that will benefit from the ice-free nature of Lithuania's prime seaport.

"Fostering and strengthening these ties will assist the Port of Philadelphia in its ongoing efforts to attract new cargoes, continuing a growth curve that will dovetail with the opening of the Panama Canal," Holt said.

Klaipeda's deep-water port connects sea, land and railway routes from east to west in that region, as far as China – the main shipping lines to the ports of Western Europe and Southeast Asia pass through Klaipeda. The port's annual cargo handling capacity is up to 45m tonnes.