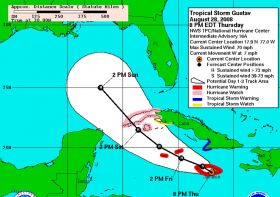 A major tropical storm has reportedly wiped out a large proportion of Jamaica's banana production, just over a year on from the devastation of the island's banana export industry at the hands of Hurricane Dean.

Tropical Storm Gustav, which struck the Caribbean island on Friday, has since strengthened to become a category four hurricane which is threatening to destroy citrus production in western Cuba.

Bobby Pottinger, president of the All Island Banana Growers Association, was quoted as saying that more than 70 per cent of the crop in eastern Jamaica had been destroyed at the hands of the storm.

"The wind that is taking place in St Mary, I fear the worst. Don't forget that we have just started shipping… we have been badly hit and we have to get back into production as quickly as possible," Mr Pottinger told local reporters.

Meanwhile, western Cuba has been battered by winds of up to 230kph (145mph). With the majority of the country's citrus production concentrated in the west – particularly in the provinces of Pinar del Río, Isla de la Juventud and Matanzas –  the coming season's harvest is understood to be under threat.

Gustav was forecast to cross Cuba's western tip into the Gulf of Mexico on Saturday night or Sunday. The weather system could apparently strike the US Gulf coast anywhere from the Florida Panhandle to Texas.

Meanwhile, the Associated Press reported that Tropical Storm Hanna, which sustained winds of almost 50mph on Saturday, was projected to curl westward into the Bahamas by early next week.