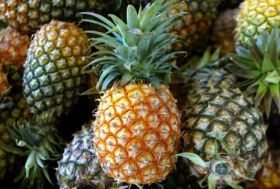 A study conducted by a University of Queensland researcher has provided new insights into the genetic and health properties of pineapples, the Fresh Fruit Portal reports.

The research by Dr Jonni Koia, which was published in the scientific journals BMC Plant Biology and Plant Molecular Biology, identified genes in processes including ripening,  redox activity and organic acid metabolis.

“In addition, my research also identified genes conferring nutritional and health benefits, such as those involved in anti-oxidant, glutathione and vitamin C production,” Koia stated in a media release.

“The results generated from my study have wide-ranging use across agriculture and food science, and could be incorporated in the future development of other important food and plant crops.

“The demand for new plant-based gene promoters without patent protection is of particular interest among the research and Agbiotech community.”

The media release added that the research could play a role in improving nutritional and dietary intake of food crops to help battle chronic diseases including cancer, diabetes and cardiovascular problems.