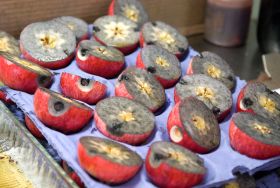 The research institute studied 27 compounds found in apples that are thought to have beneficial health properties, extracted from 109 different cultivars of apples from Plant & Food Research’s own germplasm collection as well as some from Luxembourg in Europe.

The study, published in the latest edition of the Journal of Agricultural and Food Chemistry, showed two families of compounds, procyanidins and triterpenes, inhibited activation of two molecules involved in inflammation and inflammatory diseases.

“Understanding which compounds in apple influence pathways in disease, such as IBD, allows us to breed new varieties of apple with more of these compounds that can then be used as ingredients in foods specifically designed to control the disease symptoms.”

The study was conducted by Plant & Food Research in concert with researchers at the Centre de Recherche Public-Gabriel Lippmann in Luxembourg, as part of a programme exploring the health properties of food based on genetic information.

Developing gene-specific foods that prevent, control or cure diseases is the end goal for the Nutrigenomics New Zealand programme, a collaboration between Plant & Food Research, the University of Auckland and AgResearch, with funding from the New Zealand Ministry of Business, Innovation and Employment.