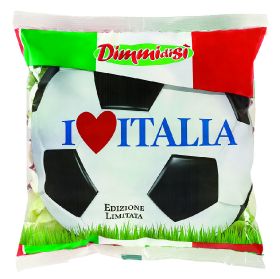 Brazil
Trade promoters in Brazil have hosted a series of events over the past year to promote its fruit exports, including mainstream items such as melons and mangoes as well as some lesser know products like guarana, açai berries, jaboticaba, jackfruit, graviola, sapoti, pitanga, amora and cajá. The Brazilian Fruit Insitute (Ibraf) has been taking part in the official Projeto Copa do Mundo (World Cup Project), inviting 12 leading buyers from Kuwait, Saudi Arabia, UAE, Italy, the US and the UK to visit the country for technical visits, business meetings and four World Cup matches. "Last year we performed a similar action during the FIFA Confederations Cup," Ibraf project manager Paulo Passos Filho tells Midia News. "The results were very positive, everyone were really satisfied and a lot of business was done."

Italy
Italian fresh convenience marketer La Linea Verde has made it something of a tradition to sell football-themed salad bags under its Dimmidisì brand, and this year's World Cup is no exception. A limited edition pack bearing the phrase I ♥ Italia features a large football and has been dubbed the fans' salad. It contains red radicchio and two types of chicory.

USA
One of the strangest fruit-football tie-ins of this World Cup is The SciTourney contest, a tournament prediction competition that, for reasons known only to the organisers, has chosen to assign a fruit fly gene name (no idea either) to each of the 32 national teams playing in Brazil. "It is a fun way to spend a few minutes predicting the winners of the world’s greatest football tournament," they explain. "Who knows? You might even learn something new about science."

Ecuador
The Ecuadorean team have apparently insisted on having all of the bananas they require delivered daily to their World Cup base instead of sourcing them locally. Each member of the country's squad and back-room staff will be given a basket of the fruit in his room.

France
Gary Assouline, a journalist and former writer at Le Figaro, has been counting down the days to the world cup in 5-a-day terms. Yesterday he tweeted: "Five fruit and vegetables until the World Cup!"

Indonesia
As revealed in the latest issue of Asiafruit, fruit traders in Indonesia are predicting a massive rise in fresh fruit sales during June and July thanks to a happy coincidence of Ramadan and the World Cup. Fruit is an integral part of the Islamic festival as it is eaten both before sunrise and to break the fast each evening, typically resulting in fruit sales to the country's 200m consumers tripling during the holy month. 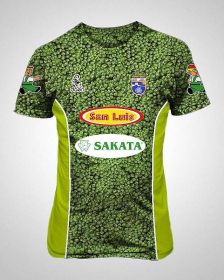 Spain
Players from Spanish lower league outfit La Hoya Lorca will be hoping the current champions can repeat their victory in South Africa and further boost the country's football industry back home. Their team is sponsored by Japanese vegetable seed firm Sakata and, as part of the deal, its home shirts carry the image of a broccoli. Its change strip (pictured), meanwhile, takes brassica product placement to a whole new level – to the extent that the team is now known as the Clockwork Broccoli.

Israel
During the latest season, Israeli citrus brand Jaffa distributed tens of thousands of pieces of free fruit to youth football teams in the UK, part of a campaign to bring back half-time oranges that was supported by England star Jack Wilshere.

England
Produce World's agriculture director Andrew Burgess revealed in one of the networking breaks during the European Vegetable Strategies conference in Brussels that he had recently hosted groundsmen from London football club Arsenal to teach them how to grow grass using nematodes, which may or may not have contributed to them winning their first trophy in nine years.