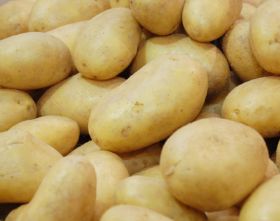 According to a new paper published by researchers at McGill University, in Canada, high potato consumption in mice was shown to decrease body weight gain.

The team believe that the findings are due to potatoes' high concentration of polyphenols - a disease-fighting chemical component found in fruits and vegetables.

Professor Luis Agellon, one of the authors of the study, said: "We were astonished by the results. We thought, 'this can't be right' - in fact, we ran the experiment again using a different batch of extract prepared from potatoes grown in another season, just to be certain."

Over a period of ten weeks, the mice - who started out weighing 25 grams on average - were each fed an 'obesity-inducing diet', with some consuming a polyphenol-rich extract made from about 30 potatoes.

By the end of the experiment, the animals who hadn't been fed the potato extract had gained an average of 16 grams.

Those who had consumed the daily dose of polyphenol-rich potato extract, however, put on only 7 grams.

The study was funded by the Natural Sciences and Engineering Research Council of Canada, the Canadian Institutes of Health Research and the Canada Foundation for Innovation.