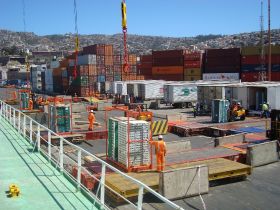 Customs workers in Chile began an indefinite strike on Wednesday, paralysing the country’s customs services. The stoppage was called by the National Association of Chilean Customs Workers (ANFACH) in a dispute over pay and working conditions.

It is not yet clear to what extent the walkout will affect fruit exporters but there are fears it could cause problems in the processing of shipping documents and delay the entry and exit of goods from the port facilities.

ANFACH is calling for the government to modernise the country’s National Customs Service and increase the number of ground staff and budget.

Speaking to Cooperativa, ANFACH president Marcelo Reyes said: “we have been in discussion with the govement for six years and during that time all we have seen are delays. We do not have sufficient resources to do the work we are expected to carry out at land, sea and air borders and a number of workers have already suffered serious accidents.”

Reyes said the strike “will mean that cargo entering and leaving the country will not be processed and buses and passenger vehicles will only be dealt with in urgent cases”.