Sweetcorn, potatoes and peas 'could cause weight gain' 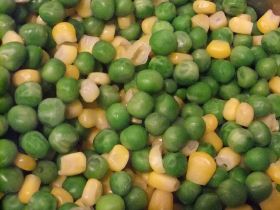 Sweetcorn, peas, potatoes and even celery could be contributing to weight gain, scientists claim to have found.

The findings come from a Harvard School of Public Health analysis of detailed dietary information provided by more than 130,000 American men and women.

Every four years, for up to 24 years, they answered questions about how often they ate 131 different foods – including many fruit and vegetables.

They were also weighed regularly and provided information about smoking, exercise, TV-watching and other aspects of their lifestyle.

The researchers claimed that fruit was twice as good as veg when it comes to weight loss, with every extra daily portion leading to around half a pound (0.2kg) of fat being shed over four years.

Blueberries were the number one fat burner, with an extra handful a day linked to almost a pound and a half (0.6kg) of weight loss.

According to the researchers, the reasons for this range from people substituting them for fattening desserts, to them being particularly rich in plant compounds called polyphenols.

Sweetcorn, peas and potatoes - baked, boiled or mashed, not in their chip form - were the fresh produce items most linked to weight gain.

All of the calculations took into account other changes to diet, as well as changes to smoking, exercise and sleep that occurred over the years.