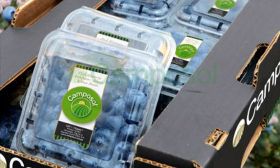 Camposol has reported second-quarter sales of US$54.2m a 6.1 per cent decrease on the year-earlier period.

The company said a 16.3 per cent fall in production of peppers, asparagus, artichokes, grapes, avocados, shrimp and other seafood products was behind the contraction. It reported a net increase in volumes of blueberries. Its total sales volume for the quarter stood at 17,597 tonnes.

Higher prices for blueberries, avocados and seafood helped push average price during the second quarter to US$3.08 per net kg, an increase of 12 per cent on 2015.

EBITDA during Q2, including discontinued operations sales, was US$6.1m, down 14.6 per cent on 2015. EBITDA margin decreased to 11.2 per cent compared with 12.4 per cent in the year-earlier period.

Camposol said the results were in line with its expectations and took into account the effects of its recently declared discontinued operations.

“We are keeping our renewed focus on our fresh and frozen business and a positive outlook for the year, especially on our avocado and our growing blueberry business,” said Manuel Salazar Diez Canseco, CEO of Camposol Holding.

The company said it expects to continue its diversification strategy by expanding production of blueberries and seafood, as well as consolidating direct sales to retailers, adding value to its clients through commercial, marketing and service initiatives which should result in higher margins.

“The long-term growth prospects for exotic fruits and vegetables markets are excellent. Avocado and blueberry consumption is growing, with headroom for increased per capita consumption in key markets,” it continued.

“The company expects good demand for all fresh produce in general in both the US and Europe.”