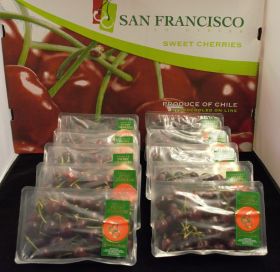 Chilean cherry production is set to bounce back in 2016/17 following favourable climatic conditions in the run-up to the new season.

A report by the USDA’s Foreign Agricultural Service says Chile’s export volume is expected to reach 110,000 tonnes as the effects of El Niño recede and new orchards come into production.

Philadelphia-based Forever Fresh said the latest estimates point to a rise of 35 per cent over last season. General manager Evan Myers said the growing season has been near perfect, providing significant chill hours for a bumper harvest.

However, he added that a cold snap at the beginning of this month would trim something off the original forecast.

“Forever Fresh expects to market more than 400,000 cartons of fresh Red and Rainier cherries in North America this season. Air freight arrivals will kick off the season in early November and additional vessel arrivals will continue through to the end of January,” the company said.

For the first time this season the company will also be offering airflown cherries from Argentina with arrivals starting in mid-February and running through to the first week of March.

Forever Fresh will also be launching its controlled atmosphere 1lb top-seal clamshells that will be sold alongside its traditional stand-up pouches.

“We are excited about our new top-sealed clamshells,” said Myers. “Extensive testing proves that this new packaging provides a tremendous opportunity to improve quality by extending shelf-life and reducing shrink at retail.”

Cherries are one of Chile’s most profitable export crops and planted area has been rising steadily, especially in the VI region, where the FAS report estimates that around a quarter of trees are still in formation and not yet producing and a further 39 per cent have yet to reach full production.

Earlier this month, Asoex presented the new consumer marketing campaign for the Chinese market. Featuring the slogan “Chilean cherries – worth every bite”, the campaign will launch in November and run through to early February. It will include outdoor and digital media channels and point-of-sale activities in hypermarket, supermarkets and specialist stores in selected Tier 1 and Tier 2 cities.