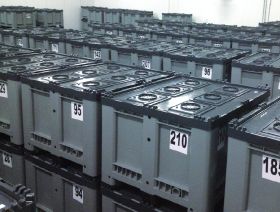 French technology specialist Janny MT (JMT) is continuing its development in the North American market, where it boasts two offices in the US (in Michigan and California) and two in Canada (in Ontario and Quebec). The company is currently looking to hire for its Michigan office as it looks to better serve local growers.

One such grower is Steve Tennes of Country Mill farm who invested in JMT boxes to add value to his blueberry production.

“The first reason I bought this equipment was for our blueberry productions,” he said. “With the price fluctuation in Michigan of approximately US$1 per pound, one filled module of blueberries can realize a US$300 gain in a few weeks. Therefore, the payback is really fast. Furthermore, I then use the modules to store apples in the same year, which makes the payback even faster.”

“For blueberries we went up to 20 days of storage,” he said. “We could have gone longer, but as prices and sales were good we stopped at 20 days. During the winter, my modules are full of apples that will remain in storage for at least four or five months.”

Benoit Janny, chief executive of JMT US, commented: “For blueberries, our modules offer a storage up to six weeks, without any loss of weight or quality. And for apples, we can bring some varieties up to eight or ten months of storage, sometimes even more.”

According to Tennes, the main advantage of the technology for his business is flexibility. “On our farm we do not have CA storage rooms,” he says. “The benefit for us is to have small CA boxes with the flexibility of having 300 pounds of blueberries or 15 bushels of different varieties of apples in each box. One benefit is not needing a large investment in a big CA room and not needing to open an entire room at the same time. Furthermore, it is really easy to use. I recommend this technology for small and medium growers who have different crops at different times of the year.”

Tennes also welcomed the local support provided by JMT. “I think it is good to have a representative in Michigan because we are close enough for the JMT representative to come out to the farm if we have an issue. The first two weeks that we were picking and storing blueberries we were in constant contact with our JMT representative to ensure that our oxygen and carbon dioxide levels were correct. I am very happy with the support.”