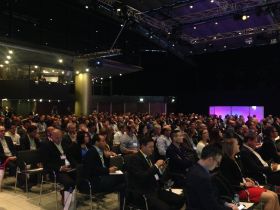 Focusing on the taste and health benefits of fresh blueberries is the key to boosting demand as global production continues to grow, according to Cort Brazleton of Fall Creek Farm and Nursery.

Speaking at a workshop on trends and forecasts in the blueberry industry at the 2017 Global Berry Congress in Rotterdam, Brazleton said clinical trials were now establishing proven links between regular blueberry consumption and health, adding further weight to industry efforts to highlight their nutritional benefits.

According to the International Blueberry Organization, worldwide production of blueberries for the fresh market reached 425,500 tonnes in 2016. With a further 229,500 tonnes grown for processing, this brings total global production to 655,000 tonnes.

The rise reflects a doubling in planted area since 2008 to over 134,000ha, the vast majority of which is located in North and South America.

Brazleton noted that although the rate of expansion of planted area in these regions had slowed somewhat in recent years, emerging regions such as Peru, Spain and Morocco were showing very dynamic growth.

Current IBO president Peter McPherson of Australia’s Costa Group said future growth would be achieved by giving the consumer what they want in terms of better varieties, improved flavour and innovative presentation formats.

John Shelford of US-based Naturipe Added Value Foods also gave an overview of the processed blueberry market and its growing relevance and impact on the fresh market.

Processed blueberries make up 52 per cent of North America’s highbush production and are an important revenue stream for US producers. With a forecast annual growth rate of 5 per cent to 2025, the industry faces some significant challenges in the coming years, which will put increasing pressure on the fresh business as the gap between market prices of fresh and frozen blueberries during periods of peak supply narrows, Shelford said.

He also noted that it was as important to enhance the flavour and eating quality of frozen berries as for fresh if current growth levels are to be sustained.