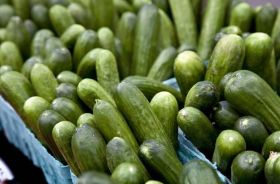 Mexican-grown fruits and vegetables have been one the main beneficiaries of the North American Free Trade Agreement (NAFTA) according to USDA data, which shows that the US has significantly increased its dependency on fresh produce imports during the past ten years.

Asparagus and avocados were among the products showing the biggest increase in dependence on imports, the former rising from a 78 per cent share in 2007 to 96 per cent in 2016 and the latter increasing from 65 per cent to 86 per cent during the same period.

The market share of imported cucumbers also rose from 52 to 74 per cent, peppers increased from 48 to 60 per cent; tomatoes from 41 to 57 per cent, and the one of blueberries from 44 to 57 per cent.

The data, reported in El Economista, reveal that while Mexico’s fruit and vegetable exports to the US have flourished under NAFTA, basic grains and oilseeds have fared less well.

Overall, Mexico’s agricultural trade balance, which was negative in the years between 1996 and 2014, has been in surplus since 2015.

Between January and August, Mexico showed a positive balance of US$2.644bn on total exports of US$10.646bn.