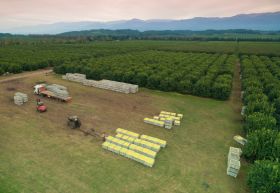 San Miguel has entered into a strategic alliance with Peru’s La Calera to jointly market their fruit in the North American market.

The deal is the latest move by the Argentine citrus giant to expand its offer and will allow both companies to supply their US and Canadian customers with a wider selection of products.

The US is set to become an increasingly important strategic market for San Miguel following last year’s lifting of a 17-year import ban on Argentine lemons.

With more than 3,000ha of farms, La Calera is one of Peru’s biggest mandarin producers and also cultivates table grapes and avocados. Its annual production is expected to reach 100,000 tonnes this year, of which around 50,000 tonnes will be exported.

Under the terms of the agreement, San Miguel has acquired a stake in Andean Sun Produce, a company belonging to the La Calera group.

Andean Sun Produce will market citrus, table grapes and avocados from four origins: Peru, Argentina, Uruguay and South Africa, including 80 per cent of the late Peruvian mandarins shipped to the US and Canada.

The company currently has offices in Swedesboro, New Jersey and Miami, Florida where its headquarters are located. In the next few months it plans to open a new headquarters in California allowing it to boost its presence on the West Coast.

“This partnership will allow us to be even closer to our customers, arriving with a better offer to American consumers,” said San Miguel’s chief marketing officer, Maximiliano D'Alessandro.

“Having the experience of Andean Sun Produce is undoubtedly a differential value when it comes to meeting the needs of the North American market, of great relevance for us because of its extension and sophistication.”

Estuardo Masias of La Calera added: “We created Andean Sun Produces [which trades as GoldCup Fresh] more than 10 years ago with the intention of reaching customers directly and reducing costs of the commercial chain.

“The alliance with San Miguel gives us just this, a greater offer of citrus with greater efficiency. We feel a lot of empathy with San Miguel, with whom we share the same long-term philosophy in this very complex business.”

San Miguel is the biggest grower and marketer of fresh citrus in the Southern Hemisphere. With nearly 10,000ha of production in Argentina, Uruguay, South Africa and Peru, it supplies more than 200 clients in 80 countries, among which the US is becoming increasingly important for its marketing strategy.