Figures show a 27.5 per cent rise in Peruvian exports to Russia between January and March 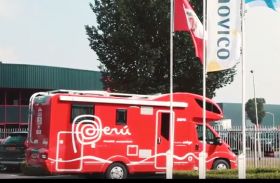 Peru has launched a new campaign to promote Peruvian products, gastronomy, culture and sports in Moscow to coincide with the 2018 Football World Cup.

Fernando Arbeloa, Peru’s commercial attaché in Istanbul who is also responsible for the Russian market, said the campaign would cover various sectors such as food, coffee and chocolate.

As part of the promotion, organised by Mincetur and PromPerú, a mobile trailer showcasing Peruvian culture and products will tour the cities where the national team is scheduled to play in the run up to the games.

The Mobile House Peru will be installed near the stadiums in the cities of Saransk, Yekaterinburg and Sochi to distribute products including T-shirts and Peruvian superfoods.

This is the first time Peru returns to the World Cup finals after a 36-year absence and it has created a surge of interest at home.

“Peru’s participation in the 2018 World Cup is a unique opportunity to showcase the best of our national offer,” PromPerú said.

Fresh fruits and vegetables are among Peru’s leading exports to Russia, which has become an important market for mandarins, grapes, blueberries, avocados and pomegranates, among other products.

“Between January and March of this year exports to Russia increased 27.5 per cent, mainly due to the increase in sendings of grapes, mangoes and mangosteens, cuttlefish and squid and avocados, among other products,” said Arbeloa, adding that exports for the whole of 2018 are expected to grow by 15 per cent compared with last year.