The US has hit back following a resolved WTO dispute, claiming that Indonesia owes it $350m in losses 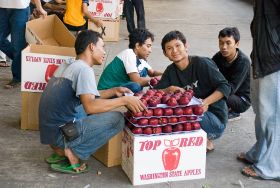 A new World Trade Organisation (WTO) filing has been requested between the US and Indonesia following amendments to Indonesia’s import restrictions.

On June 6 Indonesia’s Ministry of Agriculture revised and amended the Import Recommendations, in compliance with WTO ruling, after New Zealand and the US launched a dispute in 2014.

Following this, the US has asked the WTO to let it impose sanctions on Indonesia in response to Indonesia’s Import Recommendation revision. Reuters reported that the US said Indonesia has not complied with the ruling, which has caused damage to US interests of a predicted US$350m during 2017.

A statement from Washington said that the US will update this figure annually, in line with the expansion of Indonesia’s economy.

Washington Apples count Indonesia as their largest market in South East Asia, and since Indonesia’s import rules were introduced in 2011/12, shipments have dropped by as much as 50 per cent in following seasons.

Reuters added that it often takes years for compensation claims, and that Indonesia is likely to contest. New Zealand so far has not lodged a complaint despite estimated losses of up to US$673m to its beef industry.