Mexican exotic fruit to debut in US 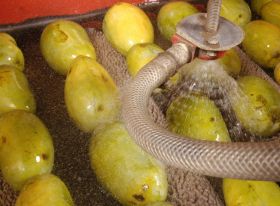 Mexico is set to export its first Manila mangos, guavas and custard apples to the US this month after exporters achieved US phytosanitary conditions to allow their produce to make its debut in the neighbouring market.

According to a statement from Mexico’s department of agriculture, the country’s exotic fruit exports have been able to enter the US market through the use of Cobalt 60 to irradiate the crops after harvest, as required under US phytosanitary regulations.

Speaking at the annual meeting of the North American Organisation for the Protection of Plants (NAPPO), Mexican agriculture secretary Alberto Cárdenas Jiménez hailed the use of irradition on exotic fruit as a “window of opportunity to make our agriculture more competitive, especially in external markets”.

Mr Cárdenas said Mexican exporters had send their first shipment of guavas to the US last week, prior to the sector’s scheduled appearance at this year’s PMA fresh produce trade show, to be held in Orlando, Florida from 24-28 October.

This will be followed next month by Mexico’s first exports to the US of the Manila mango variety, which exporters had previously been unable to treat for pests and disease using hot water because of its delicate skin.

Mexico’s federal government has also pledged US$400m for a number of phytosanitary projects, including a scheme aimed at eliminating citrus greening in 23 states, as well as campaigns to rid areas of the country of fruitflies and Mediterranean flies.