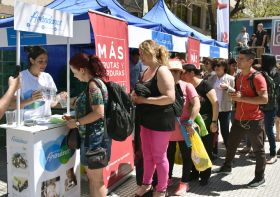 The Argentine Blueberry Committee (ABC) is holding its second Blueberry Week promotion to increase consumption on the local market when domestic production is at its peak.

Between 29 October and 4 November, tastings will be held at supermarkets, restaurants, schools, companies and public places in Buenos Aires and in regional cities. These will coincide with retail price promotions on 125g clamshells.

The social media element of the campaign will feature raffles on Facebook and Instagram, while local radio stations will hold draws for special prize bags.

The promotions are part of the ABC’s “Better with Blueberries” campaign which last year resulted in a 250 per cent increase in domestic consumption.

“The aim of this campaign is to bring export blueberries to the table of Argentineans as a fresh, natural and healthy alternative for mass consumption. We invite different players to join and help promote it,“ said the ABC’s president Federico Baya.

“Blueberry is a highly nutritious fruit that provides many health benefits such as improvement of cognitive functions, prevention of cardiovascular conditions and diseases of the urinary tract. Moreover, it helps reduce bad cholesterol,” the ABC said.

A launch event will be held on 23 October in Buenos Aires during which the health benefits of blueberries will be highlighted and renowned chef Laura Di Cola will demonstrate how they can be included in day-to-day cooking.