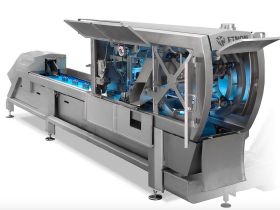 JBT Corporation has announced the launch of two systems from its FTNON fresh-cut machinery business that have been designed to make life easier for bell pepper and onion processors.

“The two systems place an emphasis not just on effectiveness and reliability, but crucially also on ease-of-use and cleanability,” the company said.

The Sweet Pepper Decorer has been designed to remove cores and problematic seeds from bell peppers in the most efficient way possible.

According to FTNON’s Lars Heuvelmans, the compact machine, which can handle two bell peppers at a time, uses pneumatic coring devices to remove the centre of peppers, before a high-pressure air system cleans out the remaining seeds.

The cored and cleaned bell peppers are cut lengthwise into pieces by a mechanical segmenting station, which enables them to be divided into halves, quarters or eights.

As well as its efficiency, a key feature of the decorer is its cleanability. “It’s easy to access all areas of the machine – you just slide out the drum and you have access to the inside, the drills and the knives,” explained Heuvelmans.

“If you look at a bell pepper, inside there are a lot of small seeds which will get into every part of the machine, so cleanability is a very important feature.”

Developed in collaboration with US-based Gills Onions and the US Department of Agriculture (USDA), the peeler focuses on yield, convenience and ease-of-cleaning, ensuring compliance with ever more stringent food hygiene requirements.

Waste and the peeled product are separated at the earliest possible stage, meaning the risk of contamination or waste peel reaching other areas of the machine is greatly reduced, while the design has eliminated chains and other hygienically vulnerable components.

Both of which, said Heuvelmans, make a very real difference, not only for improving hygiene but also for overall cleanability.

By employing super magnetism, the system also eliminates the need for wires, tubes, belts and springs, resulting in a machine with frictionless components, which has the effect of tremendously reducing maintenance costs.