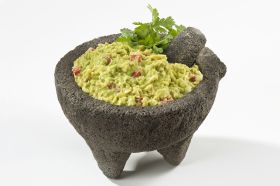 A prolonged fuel shortage in Mexico is threatening avocado supplies to the US market ahead of next month’s Super Bowl weekend.

More than 120,000 tonnes of avocados are consumed during the latter stages of the National Football League tournament, mostly in the form of guacamole.

But the Mexican government’s decision to introduce new distribution methods in a crackdown on fuel theft has caused several states – including Michoacán, the country’s main avocado producer – to run out of fuel.

“Our three most important weeks of the year are this one and the next two. This is when we ship for Super Bowl week,” Ramon Paz of APEAM, the Mexican avocado producer and exporter association, told Reuters.

So far, 27,000 tonnes of avocados have been sent to the US for the Super Bowl, which will be held on 3 February in Atlanta, Georgia. The annual football championship is the most-watched U.S. television broadcast of the year, regularly drawing more than 100 million viewers.

The fuel shortage has not yet affected exports to the United States, but it has begun to hamper transportation in Mexico for workers and harvested avocados, Paz added.

Fuel theft, which costs the government billions of dollars, is one of new president Andrés Manuel López Obrador’s first targets in his anti corruption drive.