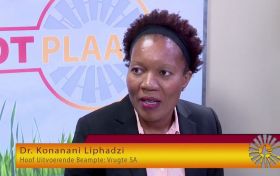 The Southern Hemisphere Association of Fresh Fruit Exporters (SHAFFE) has elected Konanani Liphadzi, CEO of Fruit South Africa, as its new president at its annual meeting in Berlin last week. Ronald Bown of Chilean exporter association Asoex has been chosen as vice president.

Liphadzi replaces outgoing president Alan Pollard, CEO of Apples and Pears of New Zealand, who was praised for his efforts over the past two years to raise awareness of the growing challenges in biosecurity that accompany global commercial operations.

As SHAFFE’s former vice president, Liphadzi has worked on defining the association’s priorities in the last two years. She will continue to implement the results of the 2017 strategy review and work towards achieving greater efficiency in internal and external communication policy.

“SHAFFE is a great network of exchange between the main actors of the Southern Hemisphere, which allows a mutual and continuous learning among its participants,” she said.

“We will continue working to achieve a better internal exchange on the development of relevant policies in the area of ​​food safety and plant health, but also to improve the visibility of the organisation.”

During the annual meeting, members agreed to continue with the strategy it embarked on two years ago to deepen understanding of the current commercial environment, through the collection of key data such as export figures, in order to improve its market forecasting.

They also analysed the key challenges of the coming years, including upcoming regulatory changes, particularly in the area of food safety and plant health, as well as climate change and the increasingly protectionist trade policies pursued by Northern Hemisphere countries.

SHAFFE’s membership comprises Argentina, Australia, Brazil, Chile, New Zealand, Peru, South Africa and Uruguay, who between them export around 9m tonnes of fruit annually with a market value of US$12.5bn, equivalent to a 20 per cent share in the global export market. The organisation was founded in the early 1990s, with the aim of supporting its members in improving their market understanding a promoting sustainable export growth.