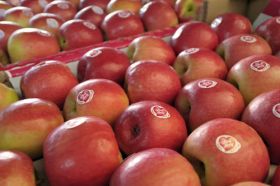 Ahead of anticipated trade talks, Washington’s congressional delegation asked US trade representative Robert Lightizer to address the issue of barriers.

Over the past three years, Stemilt Growers, which said it's the only exporter of Washington apples to Japan, has shipped a conservative 86,000 40-pound (18kg) cartons of apples to the Asian nation, breaking a 16-year export lull.

Dave Martin, export sales manager at Stemilt, told Capital Press the company may ship a further 15-20,000 cartons over the coming weeks, but has been doing so at a loss.

So far the company has sent Royal Gala, Pink Lady and Piñata varieties as they hold up in the treatment process.

“It’s a huge challenge to do it quickly and effectively in the middle of winter because of the cold,” Martin said. “Methyl bromide used in fumigation tends to congeal when cold and becomes hard to vent and it affects overall fruit quality. We could deliver top quality fruit with better protocols.”

Lighthizer said trade talks would likely begin in March and that the first meeting would likely focus on determining a scope of negotiations for agricultural products.

Martin said Washington growers have been using a non-fumigation systems approach to Taiwan and have had three to four years of zero live codling moth finds.

Mark Powers of the Northwest Horticultural Council said the new trade talks are an opportunity, and that chances of progress are higher.

In a parallel trade concern, Capital Press reported India’s string of tariff increase delays for US apples could be put to rest if a proposed decision by president Donald Trump to remove the country from the Generalised System of Preferences programme (GSP) is implemented.

Inclusion in the programme meant India, alongside other developing countries, could access the US with its goods free of tariffs. However, on 4 March Trump announced he would be removing the country.

The removal could happen on 3 May this year, at the earliest instance, and Turkey is slated to be joining the removal list.

India is one of Washington State’s largest apple export markets. Todd Fryhover, president of the Washington Apple Commission, told Capital Press India's removal from the GSP could cause the Asian nation to implement its threatened 25 per cent tariff increase, although he noted that there was equal speculation that India would show restraint over the issue. Such a duty hike would take the standard 50 per cent tariff up to 75 per cent.

As of 28 February, India had imported 1.29m cartons of Washington apples, compared with 2.9m at the same time last year. India's imports of Washington apples soared to over 8m cartons last year, partly becasue importers over-ordered in anticipation of the 25 per cent tariff increase, which was delayed multiple times throughout the year and remains on-hold.