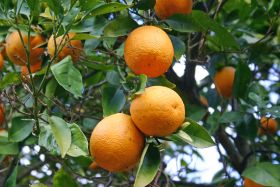 The 2018-19 California navel orange season is barely at its halfway point, but the industry is already anticipating it will be one of the more difficult campaigns in years.

Coming into the deal, the San Joaquin Valley growers knew they had a challenge on their hands: fruit in the orchards was abnormally small. This year, however, an additional factor that has nothing to do with Mother Nature threatens to complicate the current season all the more: politics.

Ever since Donald Trump came into office with his trade warfare agenda, American agriculture has borne much of the fallout. China has been the president’s primary target from the outset and the Asian nation quickly retaliated by drastically ramping up import duties on an array of US agricultural and industrial products.

A year ago, Chinese tariffs on California fresh oranges stood at 11 per cent; today it’s 51 per cent. Washington apples, Northwest cherries and California table grapes all have been saddled with similarly ratcheted-up duties.

When the initial round of retaliatory tariffs took effect in April 2018, China’s imports of US citrus – nearly all of which are oranges – fell by 44 per cent over the next three months according to the United States Department of Agriculture. Although no statistics have been published for the current season, industry opinion is that California’s orange exports to China are down substantially to date.

“There was some decent (navel) volume shipped for the Lunar New Year since there was good demand even with the extra tariffs,” said California citrus industry veteran Tom Wollenman. “There’s been very little shipped since, however.”

Based on the private data he’s seen to date, Wollenman speculated that China’s navel orange imports may be off by as much as 75 per cent by season’s end.