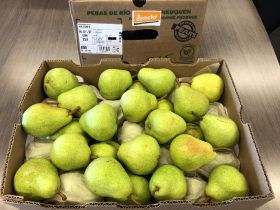 The fruit was supplied by a producer from the province of Río Negro, with whom the company has a long-standing cooperation.

Global Fruit Point has been working closely for many years with several grower-exporters around the world to market their organic fruit. One of these partners in Argentina has gone a step further and recently achieved the Demeter certification.

The long-awaited first container of Williams pears arrived at the port of Rotterdam on 8 March, where the Rotterdam branch team of Global Fruit Point received the goods and carried out the quality control on site.

On 19 March, three more containers of Argentinian pears arrived. Most of the fruit is already planned in fixed programmes for the current season, but Global Fruit Point said it sees opportunities for expanding the Demeter volume in the future.

Further containers with different varieties of pears will arrive in the coming weeks, and from April also the first early varieties of apples. The Demeter topfruit season is expected to run until the end of May.

The integration of Demeter-certified fruit in the product range from Argentina is an important measure for Global Fruit Point to meet the growing demand for organic fruit, which not only meets the minimum requirements of the EU Organic Regulation, but also the much stricter guidelines of grower’s associations such as Demeter. Demeter is the oldest German organic association and the only ecological association that maintains a worldwide network of independently certifying organisations.

Sven Heinsohn, co-CEO of Global Fruit Point: "Argentina is one of the EU's most important suppliers of organic pip fruit. We are proud of the performance of our partners in Argentina and look forward to further developing the Demeter product range together".