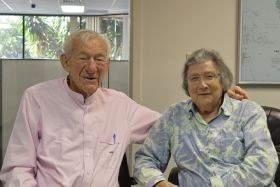 In the US, Central American Produce Company (CAPCO) has announced the passing of its founders David and Jean Warren, at the age of 103 and 94 respectively.

As founders of the group in 1976, the couple worked tirelessly for years to develop and increase produce imports from Central America.

David Warren, who helped pioneer Guatemala’s melon and vegetable exporting industries, gained much satisfaction working in the industry, providing growers with technical knowledge they can use to successfully grow, pack and ship their crops.

Although son Michael had taken over the business, David continued to come to the office and provide support until last year, and would still call in regularly to get updates from the staff on how things were going.

In recognition of David’s special work and involvement in the country of Guatemala, he was presented an award by President Arzu of Guatemala in November, 2000.

“The qualities that my father and mother had that made them successful were resilience, persistence, and passion!” Michael Warren said. “They demonstrated this daily in business and personal life."