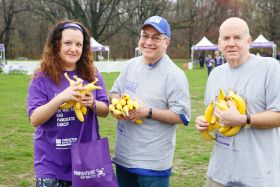 Hosted by the Pancreatic Cancer Action Network (PanCAN) New York City Affiliate, the 5k community event is aimed at promoting awareness and raising funds for the fight against pancreatic cancer.

Fyffes partnered with PurpleStride as part of the company’s “Fuel with Fyffes” initiative, which is focused on inspiring, empowering and fueling peoples’ will to create a better future.

“Fyffes is committed to recognising and supporting community members who are inspiring change and making a difference in the lives of others,” said Marion Tabard, vice-president of marketing for Fyffes North America. “We are honoured to be able to support PurpleStride and its incredible community of survivors, families, loved ones, researchers and more who are working tirelessly to bring awareness and change the future of this deadly disease.”