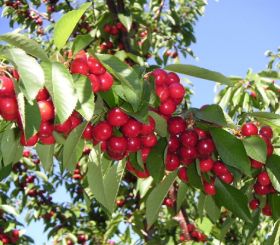 Cherry growers in California’s Bakersfield said it’s going to be a good year to start the season early, but worry that those who suffered from a late bloom will be competing with the northern states.

Harvest is beginning at some orchards for export to Asia as soon as next week, but growers like Bruce Frost, who grows several varieties across 40 acres (16ha) of land in Bakersfield, tells The Bakersfield Californian that late flowering has reduced the timing advantage Kern cherry farmers typically enjoy.

Planted hectares of cherries in Bakersfield have been falling in recent years, and growers who switched from the fruit to other items, like pistachios or almonds, aren’t looking back.

Frost said he will make do and started picking some early varieties last week. However, the variety he grows in larger volumes didn't get enough chill hours this year, so those trees won't do as well.

“It's a mixed year for me,” Frost said. “I'll make some money but it's not going to be a big barn-buster.”

Years of challenging weather have deterred cherry growers in California, but this year is looking to be better than last when a freeze cost some their entire crop.