Works will bring increased transparency and aid fight against corruption 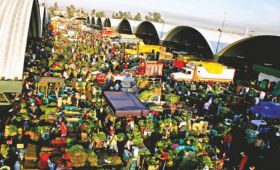 The works will include new drainage and paving, the installation of hi-tech surveillance equipment, and the digitalisation and simplification of the market’s processes, designed to bring greater transparency, accountability and boost the fight against corruption.

The market, which boasts its own police force and postcode, plays a pivotal role in the local economy, selling some 30,000 tonnes of fruit, vegetables, meat and other food products from all over the country.

The US$22m project will be funded by contributions from traders and concession services housed within the market.

The present market was built in the 2970s on the site of the legendary Great Tianechicoloyan market which dates back to the 1300s.

Today it covers an area of 327ha and is divided into eight sectors of which the fruit and vegetable market is the biggest with a total area of 640,000m2.