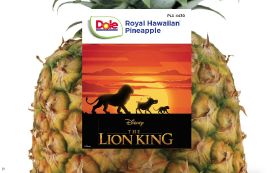 Dole is celebrating the launch of Disney’s The Lion King on 19 July with the launch of a family traditions contest that rewards one fan with a “no-worry” family vacation in Hawaii, highlighted by a visit to the famous Dole Plantation on Oahu.

The fresh produce giant is also releasing a second set of ten original recipes inspired by Disney’s The Lion King characters and themes including Banana Peel the Loaf Tonight, Circle of Life Salad, Lion Cub Lunch and the plant-based Serengeti Superfood Paleo Pizza, plus others.

Introduced on 23 May, which was National Eat More Fruits and Vegetables Day,  Dole’s latest chapter of its “Powering the Hero Within” initiative leverages the heroic saga of Simba and Disney’s The Lion King to help parents encourage no-worry nutrition in their families, including adopting a diet rich in fresh fruits and vegetables.

Dole’s “No-Worry Traditions Contest” (#NoWorryTraditions #Contest) invites fans of Dole, Disney and Disney’s The Lion King to share their favourite family tradition by posting on social media and using the appropriate hashtags, according to the official rules.

Five weekly winners will receive official The Lion King merchandise, including an official Mighty Roar Simba Interactive Plush Toy from Hasbro, plus a custom Dole hammock to relax away your tensions.

The weekly winner judged to have the most creative, unique and sentimental family tradition will receive the Grand Prize of a five-day, five-night family vacation in Hawaii.

Continuing through Labor Day, Dole’s “Powering the Hero Within” also includes healthy eating tips; social, digital and blogger/influencer executions; and images of Simba, Nala, Rifiki, Zazu, Timon, Pumbaa and other The Lion King characters on millions of Dole Bananas and Pineapples in US and Canadian supermarkets continentwide.