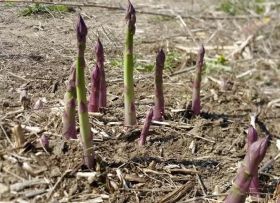 The Michigan asparagus season came to a close in the final days of June, following what the Michigan Asparagus Advisory Board called "Ideal weather conditions" through this year’s 6-7 week season.

This lead to a "resounding success for growers" despite continued competition from international producers.

“When the weather gets hot, the asparagus just shoots up,” explained John Bakker, executive director of the Michigan Asparagus Advisory Board, “Under the right conditions, we’ll see up to 10 inches of growth in a single day. Those are the days that require us to go through a field two or three times to harvest.

"If a grower gets behind, they’ll have to mow the field and lose that part of the harvest – that’s why the mild temperatures we had this season are so important," he added."

The 2019 season was a success in terms of volume produced as well as the quality of the crop, with the USDA reporting that this year’s fresh market production reached an all-time high of 14m pounds.

Beginning in late May, imported fresh asparagus from Peru and Mexico began to come into the US, undercutting costs associated with domestic production.

Michigan shippers reported that a number of retailers canceled standing orders in favour of low-cost imports.

"It is well known that growers in Peru and Mexico are able to pay workers much less, cutting down on harvesting costs – however, that’s not the only disparity," the Board said.

Michigan’s asparagus season relies on the weather, and uses rainwater instead of irrigation for a more sustainable product.

"Growers in Peru and Mexico can simply turn on their irrigation systems and harvest asparagus any time of the year. While this is great for asparagus lovers during the dead of winter, flooding the market with imported product during Michigan’s limited window of opportunity hurts Michigan family farmers as it decreases demand and puts retailers in the tough position of choosing between a fresh local product and a lower cost import.

"This season, the Michigan Asparagus Advisory Board addressed the issue head-on, with nationwide consumer-facing campaigns that emphasised freshness, food miles, sustainability, and supporting local famers. In response, consumers overwhelmingly expressed that when it comes to produce, they prefer to purchase local, US-grown items when they are in season."