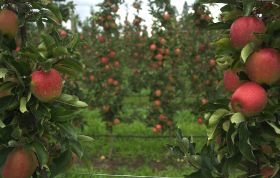 Apple saplings from the US will be imported and distributed to growers in Himachal Pradesh as part of a US$135m World Bank project to improve horticultural production.

According to a Hindustan Times report, officials from Himachal Pradesh, one of India's largest apple producing regions, are currently in the US visiting nurseries to identify what will be imported.

“A team of officials is in the US to review saplings in nurseries in various states, including California, and will return on 11 November,” ML Dhiman, horticulture director of Himachal Pradesh, told the Hindustan Times.

“We have received a positive response. Decisions will be taken after the officials return. The apple saplings will be imported soon.”

Harish Chauhan, president of the Fruits Vegetables and Flower Growing Association of Himachal Pradesh, told the Hindustan Times, the state government may consider importing saplings from more countries as the project continues.