As the company closes in on becoming a year-round supplier, water sustainability is at the forefront of its activities 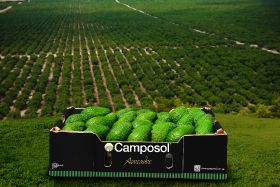 Fresh produce group Camposol recently finished its avocado season in Peru, noting that, after a high performance during the last campaign, volumes produced were somewhat lower due to the effect of the crop rotation.

As a result, Camposol said that it expected Peruvian volumes to increase again by 2020.

In Colombia, the company said that it had focused on the expansion of its avocado crop. Current sown area is 1,300ha and Camposol expects to reach a production of 40,000 tonnes annually, similar to volumes in Peru, by 2025.

Combining the Peruvian and Colombian commercial windows means the company is "increasingly closer to becoming an all-year-round player in this product", Camposol noted.

Some 50 per cent of exported avocados went to the US, 35 per cent to Europe, and the remaining 15 per cent to Asia and the rest of the world, the group confirmed.

In Asia, Camposol said that it was very interested in Korea, a country with more than 50m inhabitants, that recently opened its market to Peruvian avocados.

"Hass avocado demand continues growing at an annual rate of 4 per cent to 5 per cent," said Jorge Ramírez, Camposol’s CEO. "More mature markets, such as those from the US and Europe, consume 3.1kg and 1.8kg per capita, respectively.

"China has only a 0.3kg per capita consumption, so there is a huge potential we must foster there during the next ten years," he noted. "This superfruit, which meets the increasing needs of the world markets that demand fresh and healthy food, has an excellent horizon.”

One of the main challenges Camposol faces regarding the cultivation of avocados – as well as other products – is ensuring a sustainable irrigation system.

"On the one hand, unlike countries as Mexico and Chile, the provision of water for sown fields in Peru comes from irrigation projects that transport water from the Andes to the coastal strip, so the absence of rains does not represent a risk for the crops," the group stated. "On the other hand, and according to the Camposol Cares from Farm to Family (CCFFTF) corporate philosophy, the company is aware of its responsibility regarding climate change and, therefore, is working in measuring and reducing its water footprint."

For five years, and in collaboration with the SuizAgua organisation, Camposol has been measuring the water footprint of its blueberries, avocados and mandarins, as well as the footprint in the industrial processes of blueberries, fresh avocados and frozen mangoes.

The company also participates in the Blue Certificate programme that the National Water Authority (ANA, in Spanish) leads. The ANA congregates not only companies that measure its impact, but also those companies that develop water footprint reduction projects and generate shared value through the work they do inside the community.

In 2019, Camposol was the first Peruvian agroindustrial company in obtaining the certificate.

Within the community, Camposol said that it is contributing to improving the educational infrastructure of two schools near its operations and promoting educational days that emphasise the importance of water, supporting awareness in the youngest sectors of the population.

“All these initiatives are part of our strategy to reduce our impacts on the agricultural ecosystem and, therefore, we use natural resources in a responsible way, promote efficiency and continuous improvement of our processes, and foster the reuse of resources," Ramirez added.