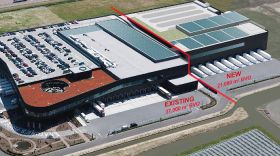 The company revealed it will expand its packhouse facilities by around 21,000m2 to prepare for further commercial growth.

Starting in September and due to finish in the final quarter of 2021, the project will include the construction of new packing areas, cold storage rooms and ripening chambers.

Welcoming the news, Nature’s Pride chief commercial officer Willem Verbakel pointed to the major impact that shelf-life extension technology like Apeel is having on the market for exotics in Europe.

“The rising demand for our ripened produce and the success of Apeel is driving rapid growth,” he explained. “The expansion will result in more space for ripening chambers and the logistics process. The warehouse facility will be automated and packing robots installed at the sorting lines. This will enable continued growth and safeguard our quality.”

The company has chosen practically the same construction team responsible for making its eye-catching headquarters, which opened at the end of 2013, a highly sustainable and highly automated reality.

“These four companies are familiar partners who also constructed our current premises. A tried and trusted partnership, that we believe will result in the joint creation of an impressive and sustainable building featuring the latest technology.”

The new premises has been designed by Paul de Ruiter Architects, which worked on the original headquarters, which placed a major focus on the people within as well as the environment at large.

“The sustainable characteristics of the building will be applied in line with recommendations from consultancy and engineering service DWA,” the company noted in a statement, adding that it hoped the extension would received the highest possible certification for its sustainability.

Its new packing, cooling and ripening areas, for example will be heated and cooled using residual heat generated by the cooling system itself.

Rainwater will also be harvested, distributed and reused, while vegetation covering the roof will convert carbon dioxide into oxygen and filter fine particles from the air.