Dole alliance with Pixar aims to take the fright out of fresh produce with activities inspired by Monsters, Inc. 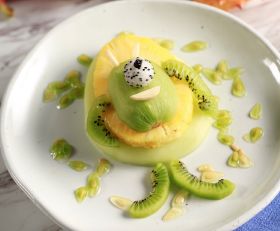 Dole Food Company is seeking to take the scare out of specialty or unfamiliar fruits and veggies with a unique summer initiative designed to widen the public’s produce horizons to create new family favourites beyond the tried and true.

“Dole’s passion for produce includes not only America’s favorites – bananas, apples, lettuces, celery, carrots and broccoli – but dozens of more diverse and exotic fruits and vegetables liked horned melon, dragonfruit and artichokes,” said William Goldfield, Dole’s director of communications. “Whether it’s their angry names and thorny exteriors, or simply a misperception about taste and preparation, produce paranoia has become a very real phenomenon.

“Even the beloved pineapple, the fruit at the very heart of Dole and the universal symbol for aloha and hospitality, can strike fear in those tasked with having to cut and serve one," he noted.

According to Goldfield, Dole worked closely with the team at Pixar and Disney to create ten original 'Monsters in the Kitchen' recipes inspired by Sulley, Mike, Roz, Boo and other Monstropolis residents.

For most North Americans, the first sign of Dole’s monstrous alliance came in May when images of Sulley and Mike started appearing on millions of Dole Bananas and Pineapples in US and Canadian supermarkets.

The in-store and at-home adventures are part of Dole’s year-long celebration of Pixar Animation Studios and a larger, long-term nutritional alliance with The Walt Disney Company designed to make healthy eating and a diet rich in fresh fruits and vegetables more fun and accessible to busy parents.

“In addition to introducing (or reintroducing) families to forgotten fruits and veggies, we’re out to correct some everyday produce myths ranging from brussels sprouts will always taste bitter to there is no good use for overripe bananas," said Goldfield. "Plus, we’ll lay to rest forever the misconception that only perfectly ripe, unblemished produce is worthy of our recipes and attention.

“That’s because, like the characters in a Disney or Pixar feature, you can’t judge a fruit or vegetable by its appearance; nature’s true beauty often lies within," he added. "And yes, we’ll remove the anxiety and show you how to cut a Dole Tropical Gold Pineapple once and for all.”