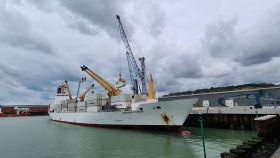 “We are delighted to be welcoming Seatrade back to Dover for many regular calls now and into the future," said Nik Scott-Gray, general manager at Port of Dover Cargo. "Port of Dover has an excellent trade in perishable cargo, so we are pleased to be the UK port of choice for two major Seatrade services.

"Port of Dover Cargo is unrivalled with its efficiency and strategic location next to the world’s busiest shipping lane, so we are perfectly placed to help deliver Seatrade’s fast, direct and dedicated transits," Scott-Gray added.

"We look forward to enjoying Dover’s operational excellence, which is something of great importance to our clients, particularly in terms of warehousing and deliveries. I am sure our partnership will take Port of Dover Cargo’s already fantastic experience of handling temperature controlled products to new heights.”