Leading Turkish exporter Alanar is ready for the rising demand for figs, thanks to its new facility and state-of-the-art sorting machine 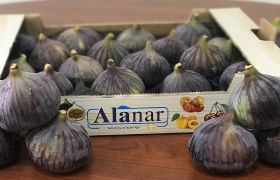 "We expect to produce more than 2,000 tonnes this year," he revealed. "Due to Covid-19, we thought demand might lessen compared with last year, but it is even higher. Germany will be the main market for us again. We will also be exporting our figs to East Asian countries including Hong Kong, Singapore and Malaysia. We are also seeing increasing demand from various countries such as the UK, France, Canada and the UAE."

For its fig operation, Alanar has just moved to a new facility in İznik, in the Bursa region, according to Gökyiğit. "We have invested in the most advanced fig sorting machine, made in France," he said. "The machinery was installed in our new facility, ready to be used for this year's fig season. Alanar's aim is to ensure the highest quality standards for its figs and provide the best possible service."