Orange boom a boon for Egypt

Egyptian oranges benefit from growing popularity of citrus following Covid-19, with exporters prepared for an increase in global demand 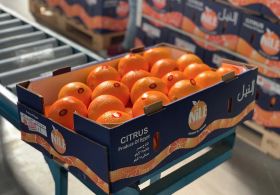 Since the outbreak of Covid-19, the popularity of vitamin C-packed fruit like oranges and other citrus has soared, and big producing countries like Egypt are expected to continue to benefit from the increased demand.

Egyptian exporter Nile Establishment for International Trade is witnessing a rise in demand, according to marketing director Ahmed Ghazy, who believes that the years of investment have prepared the country well.

“Due to years of investing to expand cultivation areas and to enhance agricultural products’ quality to meet international standards for exportation purposes, the Egyptian agricultural products will see increasing demand from the international market,” he says. “Production of oranges in Egypt has skyrocketed on account of improved irrigation, low labour costs and the devaluation of the Egyptian pound.”

At the beginning of the pandemic, he reveals, exports dropped by 10-15 per cent, as restrictions imposed by importing countries brought a halt to shipments. However, they quickly resumed.

“Egypt has exported around 2.35m tonnes of fruit and vegetables in 2020,” says Ghazy. “Oranges make up the lion share with around 1.2m tonnes, and next season we expect that volume to increase by 17-20 per cent.”

According to Ghazy, Nile Establishment for International Trade’s use of the latest technology for sorting and grading gives it an advantage.

“The Globalscan 6, with its external analysis system, guarantees the products are carefully sorted according to their colour, shape and external quality,” he says. “For the next orange season, we plan to export around 85,000 tonnes, and we are targeting new markets for Egyptian oranges such as Brazil and New Zealand.”

Such technology has helped Egypt to challenge Spain for the top spot globally. “Egypt has been competing with Spain for first place in citrus exports, but Egypt is now number one,” says Ghazy. “Spain now even imports Egyptian oranges, which are gaining in popularity due to their price and quality.”

The company’s long-term aim is to grow its exports beyond 100,000 tonnes, says Ghazy, through expanding its acreage, production facilities and packhouses, while maintaining a world-class team and making use of top-line technology.