Peruvian strike comes to an end 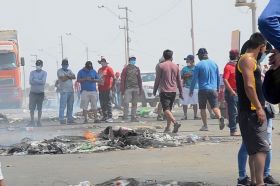 Peru’s agri-export sector planned to resume normal operations on Monday after one week of disruptions in some of the country’s biggest production areas.

“Since 30 November, the valleys of Ica and Chao experienced the interruption of its operations due to road blockages,” the Association of Agricultural Producers Guild (AGAP) said in a press release on Sunday.

“As a consequence, harvest and packing of table grapes, blueberries and asparagus were delayed for a few days and are now expected to return to projected levels of export.”

The strike was in protest at some companies using third-party worker contractors acting as intermediaries. It is claimed that these operators – who are not supervised by the government labour inspection bureau – have not provided all the benefits that the law establishes for agricultural workers.

The strikers were also calling for pay increases and the abolishment of the law that promotes Peruvian agriculture.

As a result of their action, Congress has voted to present a redrafted version of the Agricultural Promotion Law within two weeks.

AGAP has publicly condemned non-compliance of labour laws, urged the government to maintain the rule of law, and requested government´s labour inspection institutions to increase its scope of control.

The organisation has also offered to help the government to draft a new legal framework to improve working conditions and increase the scope of inclusiveness and progress in small farmlands and rural life.

The companies that make up Peru’s agri-export sector, represented by AGAP, employ more than 300,000 workers, and have helped to drastically reduce Peru´s poverty rate, while providing jobs with access to health and pension benefits, and a safe environment at work.

AGAP stressed that the problem was not being caused by the companies acting within the law but by informal ones acting outside of it, which government institutions have failed to supervise and sanction.

AGAP’s members also highlighted the fact that export companies need to comply with international certifications audited by GlobalGAP, Grasp, SMETA and Rainforest Alliance among others, which impose social and ethical standards as a requirement for accessing the most competitive markets in the world.

According to the National Statistics Office, in 2019 the rate of formal employment in agriculture was 98 per cent in companies with more than 100 employees, compared to just 1 per cent for the rest of the sector, an astonishing difference.

Most of the companies that are involved in agri-exports are modern operations with large personnel, who paused their operation during the strike to safeguard its workforce AGAP said.