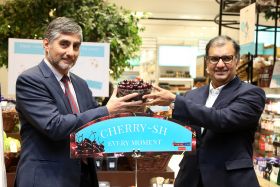 Chilean cherries have received their first promotional campaign in India targeting consumers and wholesalers through traditional and online channels.

The Chilean Cherry Committee of the Chilean Fruit Exporters Association (Asoex), together with the Embassy of Chile in India and the Commercial Office of ProChile in India, officially launched the campaign a week before Christmas.

The launch was led by Juan Angulo, ambassador of Chile in India, and took place at Foodhall, New Delhi, where a display of Chilean cherries was installed.

Simultaneous promotions were kicked off with other retailers including KPN Farm Fresh in South India and with two of India's largest e-commerce players for fresh produce - Big Basket and Milk Basket. More retailers will be added to the campaign in January 2021.

In addition to these activations, extensive wholesale market outreach and promotions with traditional roadside retailers, who still control majority of sales in India, have also been planned.

“We envisage immense potential for Chilean cherries in India. Cherry production in Chile is 100 per cent against season to Indian cherry production that occurs in June-July,” Saran explained.

“Chilean cherries will be on the market in December and January. It is a perfect time for a fruit like cherries, as demand is high for Christmas, New Years, the Pongal holiday period  and Valentine's Day, among other celebrations.

“Our campaign carries the slogan ‘Cherry-sh Every Moment’, which is extremely apt for the way the year has been for most of us. We have designed a comprehensive strategy to bring this delicious fruit to the most discerning Indian consumers across the country. These cherries will be available, both in fruit retail chains, electronic commerce platforms and wholesale markets,” Saran added.