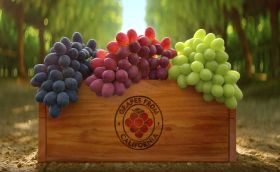 The study shows that 46 per cent of primary shoppers consider fresh grapes to be a household staple, up from 32 per cent in 2019. Another 35 per cent reported that grapes are purchased often in their households.

Last year, 57 per cent of the shoppers surveys said they always or usually decide to purchase fresh grapes before going into the store, up from 42 per cent in 2019.

The number of primary shoppers reporting buying grapes at least once a week in 2020 stood at 56 per cent, up from 52 per cent the previous year.

When asked about prices, respondents considered US$2.48/lb to be a reasonable level, while a price of US$1.59/lb was seen as a bargain. However, US$3.74/lb was regarded as too expensive.

The survey also showed that 36 per cent of shoppers purchased fresh grapes via online ordering last year. Of these, 70 per cent said they are very likely to continue to do so  the next 12 month, and another 28 per cent stated that they are “somewhat likely”.

The study used quotas and weighting to assure accurate reflection of US Census figures for age, gender, geographic region, and race/ethnicity.