US sees potential in diversification 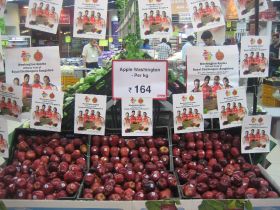 USDA officials have identified the potential India and other emerging markets in Asia hold for its agricultural exporters.

According to a report from S&P Global, Jason Hafemeister, acting deputy under secretary for trade and foreign agriculture affairs of the USDA, told the department’s Agriculture Outlook Forum there were huge possibilities outside of the US’ current top markets.

Currently around 40 per cent of agriculture exports are sent to markets outside China, Canada, Japan, Mexico, the EU and UK and Korea, the US’ top six markets.

"These countries have got real challenges in terms of agriculture production — limited land base, limited water, and many of them are tropical countries so they can't produce the kind of land extensive, high-technology, temperate agriculture products we are so good at," Hafemeister said.

"So, not only there is a lot of money to be made in this tail, that's what our growth is."

In particular, Hafemeister highlighted India as a “game-changer”, which has the potential to replicate China’s recent rise.

Nuts and apples already lead the way for US agricultural exports to India but Hafemeister said there was room for improvement.

"India is the one that first comes to mind, a billion people — their real challenges in terms of agricultural production, growing economy, lots of trade barriers," Hafemeister said.

"Our current export performance there is relatively poor, but you could imagine, if we had a straight shot to the Indian customers, we'd see another big surge in demand for our products."