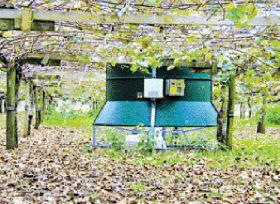 A system developed recently to protect crops against frost is apparently proving increasingly popular with growers.

The system is seen as a green and low-cost alternative to existing frost prevention methods, such as wind machines.

Pedro Mastrángelo, vice-president and CEO of FPC, explained that the SIS system is growing in popularity across the globe. “More than 2000 SIS machines are currently operating in the US, Canada, Australia, New Zealand, South Africa, Chile, Spain, Argentina and Uruguay, protecting thousands of hectares of diverse fruits and vineyards,” he told Fruitnet.com. “The system is being increasingly adopted worldwide due to its effectiveness and low investment (US$1,500-US$2,500 per ha) and operating costs (US$1 per ha per night of frost).

Anton Barker, managing trustee of Bethlehem Farmers in South Africa, said that the SIS equipment had proved successful at his company during the 2006 season when the system was first implemented.

“For the first time in five years orchards in the low lying areas of the farm had a full, good quality crop,” he said. “In the previous years the frost resulted in crop being damaged or lost in these areas.”