The group has revealed plans to increase flights across its SkyCargo network by 14 per cent, boosting capacity in the process 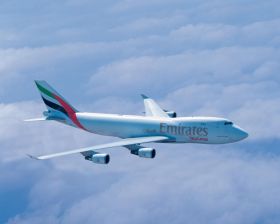 Emirates SkyCargo has announced that it is to increase the cargo capacity on its network by 17 per cent this year, by growing the number of flights 14 per cent through the addition of new aircraft.

The additional capacity will add over 700 tonnes to the Emirates fleet, with the group set to take delivery of two new modern Boeing 777 freighters during the year as well as adding 18 wide-bodied passenger aircraft to its roster.

"The last two years have not been easy for the air cargo industry, but we hope to see some stability return in the coming months," said Ram Menen, Emirates divisional sector vice-president for cargo. "For Emirates SkyCargo, 2009 will be a year of consolidation. We will bolster our presence in markets where we have a greater demand from our customers, such as Africa and China."

In addition, Emirates will introduce a new Dubai-Durban service on 1 October, which will be served by an Airbus A330-200. This follows recent moves increasing capacity from its Dubai hub to India, and a new Dubai-Laos (Nigeria) weekly service.