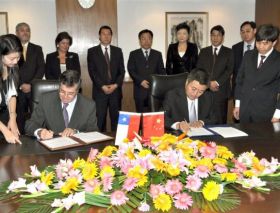 A Chilean delegation comprising of high-ranking fresh produce export officials and minister of agriculture Marigen Hornkohl has visited China and South Korea for a series of meetings to discuss increased trade opportunities between the countries.

Accompanying Ms Hornkohl were Ronald Bown, president of the Chilean Exporter Association (ASOEX), Victor Venegas, the national director of the agriculture and livestock department, and presidents of the Chilean National Agriculture Society and Chilean association of Poultry and Swine Farmers.

A number of deals were discussed in China with the country's minister of agriculture and China's Animal and Plant Health Agency, including fresh blueberry entry to China, protocols authorising in-transit cold treatment for apple and kiwifruit exports to China, and an agreement on Good Agricultural Practices (GAP) by standardising the ChinaGAP and ChileGAP protocols.

The parties came to an agreement regarding GAP protocols at a ceremony Friday 25 September, with the deal representing the first of its kind signed by China and a third country, according to Mr Bown.

Prior to the Chinese visit, the Chilean delegation had held meetings in South Korea, with the visit coinciding with the opening of a new agricultural office in Seoul.

"This action was taken because we believe that new business prospects will open from here, hence indubitably further stimulating the economy and facilitating the emergence of new cooperation and trade opportunities," said Ms Hornkohl.