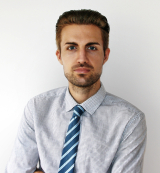 Martyn had joined the industry-leading Journal and associated titles as a Staff Writer in September 2013.

He now works as the Editor of Better Wholesaling, and can be found on Twitter via this link.