Urbanisation has meant a move towards supermarket, hypermarket and convenience store shopping for produce-buying consumers 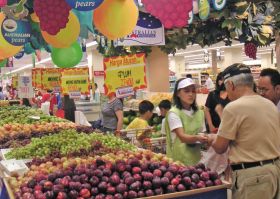 Indonesian market conditions have shifted as the economic tides move in South East Asia, bringing some new opportunities for retailers and keeping importers on their toes as affordable supply shifts.

Fruit consumption has also risen, thanks largely to the increase in low-priced imports from China, particularly apples which dominate the lower end of the market. “We have to thank China,” Kafi Kurnia of the Washington Apple Commission said. “It’s educating the market on quality difference; now people are willing to pay US$40 for a carton of Washington apples.”

Indonesia has not been immune to the effects of slowing economies Asia-wide, however, driving consumption levels down in the lower end of the market. Importers and retailers say the dip has not significantly affected their sales.

Australian imports have fallen off sharply, however, as adverse exchange rates and tariffs combine to price the country’s produce out of reach for importers. Chile and South Africa have supplanted much of Australia’s former market share, even while fuel costs narrow the price difference.

Australian produce may be set for a resurgence, however, as a looming ASEAN-Australia-New Zealand Free Trade Agreement offers to drop tariffs on imports from the country significantly.