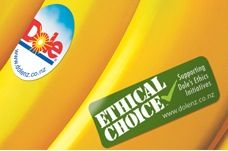 A number of reports in New Zealand have claimed that fresh produce group Dole Asia Fresh Produce – recently sold by US multinational Dole Food Company to Japanese firm Itochu Corp – has lodged a trademark application in the country for its Ethical Choice brand.

The New Zealand branch of Fair Trade is understood to have officially registered an objection to the move, which international charitable organisation Oxfam said would enable Dole to "escape scrutiny and potential challenge" with regard to the brand.

The trademark itself attracted controversy a few months ago when New Zealand's Commerce Commission warned that the company's label could be misleading for consumers and, indeed, break the rules of the Fair Trade Act.

The Commission said the label could give shoppers the impression that Dole-branded bananas had been certified by a third party and were more ethical than its competitors.

At the time, Dole agreed to remove all Ethical Choice advertising from stores in the country, but a TVNZ investigation this week found the label was apparently still in use.

It has now emerged that Dole is aiming to trademark the label, a move which in theory would remove a current obligation to back up the ethical claims.

The report quoted Dole as defending the labels and pointing out that the company sipported education and social programmes in the Philippines, from where the bananas in question are sourced.