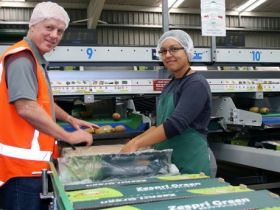 New Zealand's largest grower-owned kiwifruit packer, EastPack, is aiming to pack 25m trays this season and has targeted net profit of NZ$5m, having posted an operating profit of NZ$1.5m for 2013 – its first annual result since merging with another post-harvest supplier, Satara.

EastPack chairman Ray Sharp said he was pleased with the result, although he said it was lower than the company had budgeted for due to an unexpected fall in the number of trays packed.

"The end-of-year financial results show that, following our March 2013 merger with Satara, which was the biggest merger in New Zealand’s kiwifruit history, it is clear that both residual companies are better off post-merger by around NZ$3m," Sharp said.

"While the merger was not without considerable one-off costs, had it not proceeded both companies would have operated at a loss for the 2013 financial year."

According to Sharp, the merger of EastPack and Satara occurred as the NZ kiwifruit industry reached its lowest point as far as fruit volume was concerned, a direct result of the loss of Hort16A kiwifruit (branded in export markets as Zespri Gold) due to Psa and the continued conversion of Hayward production area to new varieties.

"EastPack’s objective was to rationalise over-capacity between the companies and pack the combined company’s fruit through the most efficient sites with the best plant and equipment," Sharp added.

The merger is expected to result in further benefits during the coming years as the companies' respective systems are integrated and improved, assets are better utilised, fruit volume recovers and further capital investment is made in improved plant and equipment.

EastPack's commitment to Lean manufacturing methods – labelled 'Growing Excellence' – has apparently reduced cost and waste by 28 per cent during the past five years.

EastPack identified a number of highlights from last year, including:

"The general recovery of orchard values during the past 12 months has been spectacular, and this is leading to a renewed sense of optimism in the industry, as well as a lot of relief amongst growers! This is a clear signal that growers are willing to reinvest in their orchard assets," he said.

"The knowledge that the kiwifruit category will be in short supply during the next three to five years has also influenced overall confidence in the industry. There is big excitement in the markets about G3 Sungold and other new varieties, and EastPack is well positioned to establish itself as a leader in new varieties."

EastPack's strategy for the year ahead will include building on that renewed confidence and ensuring grower shareholders benefit from continued improvement in terms of productivity, employee engagement and financial performance.

Sharp said EastPack was aiming to pack 25m trays this season, as well as improving Green orchard productivity by 13 per cent, achieving net profit of NZ$5m and establishing EastPack as a leader in new varieties.

Reducing fruit loss would continue to be an area of great importance, he added.

Establishing its newly formed NutriKiwi brand as a category leader in Australia and other markets is also set to be high on EastPack's list of prorities.

Its joint venture with Opac, DMS and Trevelyan’s – nicknamed the Nutritious Kiwifruit Company – will co-ordinate and market more than half of New Zealand's Class 2 Hayward and 46-count (excluding Zespri Class 1 volume) into Australia and other markets, with a focus on the well-known nutritional benefits of kiwifruit.

"EastPack is excited about this development as it is something that we have spoken about for many years in different forums and to finally get this up and running is a signal of the maturity which exists in the industry," Sharp said.

"The quality and quantity of Green Hayward this season is most encouraging and the new varieties are looking extremely promising - more promising than at the same time last year," Hawken commented.